In the MR CLEAN-MED trial, a team led by the Erasmus MC investigated the effectiveness and safety of using antithrombotic drugs acetylsalicylic acid (aspirin) and heparin during the catheter treatment of stroke. In this treatment, the blood clot is removed from the brain with a catheter via the femoral artery in the groin. Additional antithrombotic therapy should ensure that the smaller blood vessels also open up. Until now, however, it was unknown whether the potential benefits of these drugs outweighed the increased risk of a intracerebral hemorrhage.

This now appears not to be the case. Patients who were given intravenous acetylsalicylic acid or heparin had about twice the incidence of serious intracerebral hemorrhage compared to patients who did not receive antithrombotic drugs. Intracerebral hemorrhage occurred in 14 percent of patients in the acetylsalicylic acid group and 13 percent in the heparin group, versus 7 percent of patients in the control group.

In addition, there was no evidence that patients recovered better when given antithrombotic drugs. In total, the researchers included 628 patients in the study before it was terminated early because of the findings.

The researchers report their findings in the scientific journal The Lancet.

In catheter treatment, a patient with an acute ischemic stroke has a thin catheter inserted into an artery in the groin. The catheter is advanced into the occluded blood vessel in the brain. Then the blood clot is removed through the catheter. The catheter approach became the standard procedure after the MR CLEAN study led by neurologist Prof. Diederik Dippel and radiologist Prof. Aad van der Lugt of Erasmus MC in 2015 showed that it leads to less brain damage and better recovery. Only a subgroup of patients with a severe stroke that is diagnosed quickly are eligible for catheter treatment.

Rapid catheter treatment does not always lead to better outcomes. This is because the clot occluding a blood vessel in the brain often cannot be completely removed, and smaller blood vessels remain occluded. Therefore, intravenous antithrombotic drugs were often administered during catheter treatment. 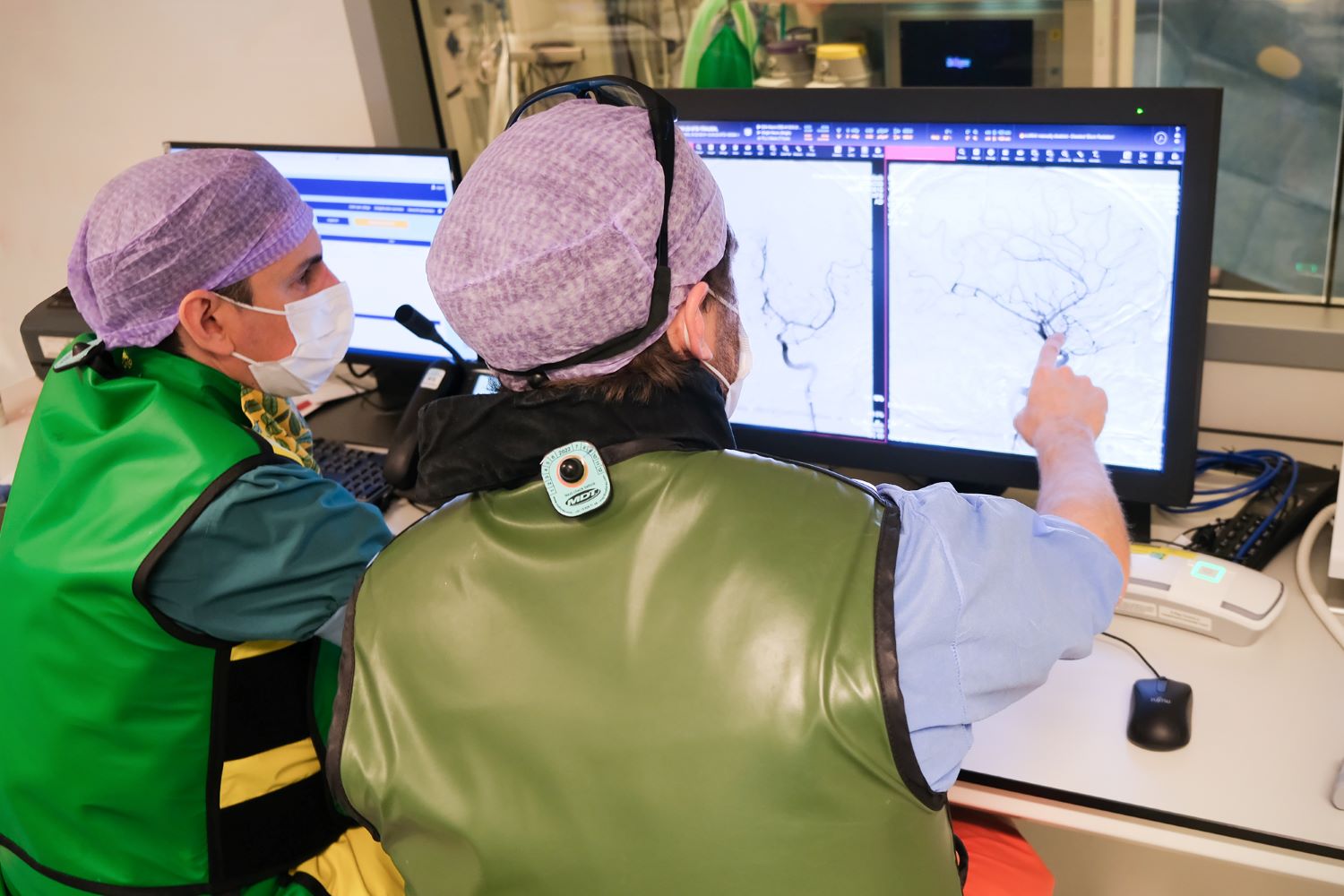 The researchers expect their results to change worldwide guidelines for administration of antithrombotic drugs during catheter treatment of stroke. ‘This could prevent a large number of serious intracerebral hemorrhages worldwide,’ says neurologist-in-training and first author Wouter van der Steen.

At Erasmus MC, intravenous acetylsalicylic acid or heparin are no longer administered during the catheter treatment of stroke.

The fact that the antithrombotic therapy lead to more intracerebral hemorrhages is probably caused by damaged brain tissue as a result of the stroke. ‘When a clot obstructs a blood vessel, the brain tissue behind it dies. This makes it vulnerable and more susceptible to bleeding. Antithrombotic drugs then increase the risk of bleeding,’ explains neurologist and coordinating researcher Dr. Bob Roozenbeek.

He is pleased that their study now provides a definite answer regarding the administration of a acetylsalicylic acid or heparin during catheter treatment of stroke. ‘We knew we were dealing with the balance between the bleeding risk and the potential benefit of opening the small vessels. Now it is clear that the benefits do not outweigh the harms.’

The researchers emphasize that their study results do not concern the antithrombotic drugs that stroke patients are prescribed to prevent another stroke. ‘It’s safe and very important to continue using this medication’, Roozenbeek says.

The MR CLEAN MED trial was led by Prof. Diederik Dippel and Prof. Aad van der Lugt of Erasmus MC and was made possible by the Dutch Hartstichting and Hersenstichting. This study received unrestricted funding through the CONTRAST consortium.

This study was funded through the CONTRAST consortium, which acknowledges the support from the Netherlands Cardiovascular Research Initiative, an initiative of the Dutch Heart Foundation (CVON2015-01: CONTRAST), and from the Brain Foundation Netherlands (HA2015.01.06). The collaboration project is additionally financed by the Ministry of Economic Affairs by means of the PPP Allowance made available by the Top Sector Life Sciences & Health to stimulate public-private partnerships (LSHM17016). The consortium received unrestricted funding from Stryker, Medtronic and Cerenovus for research.