In the center of this story is an extraordinary patient. The young man reported to pediatrician-in-training and immunologist Fabian Kaiser at Erasmus MC with recurrent infections. His body turned out to produce too few antibodies. After a some research, the cause came to light: the patient has a mutation in both copies of the so-called PAX5 gene. One copy does not work at all and the copy works less well. PAX5 plays a role in the development of B cells, the cells that produce antibodies.

But there was something else special about the young man. He also has neurological problems: autism, a developmental delay, and motor deficits. Autism had previously been linked to a single mutation in the PAX5 gene, but whether this was a causal link remained unclear.

The case brought Kaiser and PAX5-specialized immunologists from the Research Institute of Molecular Pathology in Vienna together with neuroscientist Aleksandra Badura from Erasmus MC. The team set out to find the answer to the question: are PAX5 mutations the cause of both the immunological and neurological problems?

The answer seems to be “yes,” the scientists write in the Journal of Experimental Medicine. A mouse with the exact same PAX5 mutations as the young man, which the team created using the CRISPR-Cas technique, was incredibly similar. The mouse also had problems with antibody-mediated immunity, learning difficulties, and showed behaviors similar to autism.

‘Quite remarkable, because in neuroscience we don’t often see a mouse model look so much like a patient. From the way the mice move in the cage, you can immediately tell which mice have the mutation,’ said Badura.

Deep in the brain

To explain the behavior, Badura took a look inside the mice’s brains. There she found abnormalities in the cerebellum and saw that structures deep in the brain called the substantia nigra and the ventral tegmental area were a lot smaller than normal. These abnormalities could also be seen on an MRI scan of the young man’s brain. 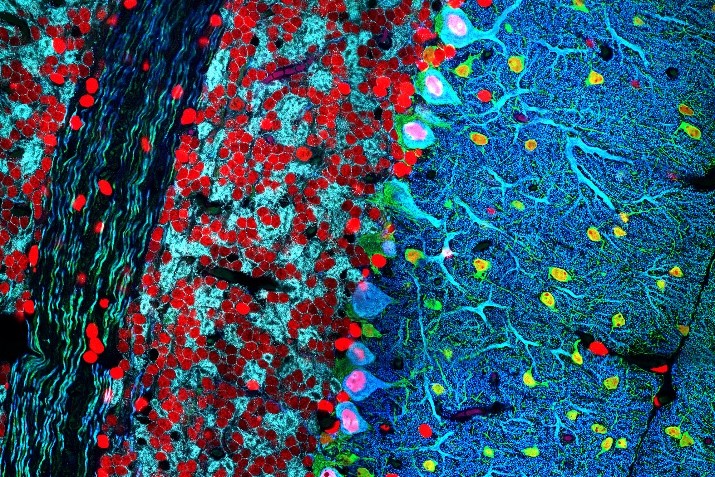 Specifically, there seems to be a lack of the type of neuron that inhibits other neurons. Badura: ‘That could explain why the patient exhibits uninhibited behavior. Exactly how PAX5 affects the development of these inhibitory neurons is something we will continue to explore.’

By combining the mouse model with the patient’s data, the team can now explain for the first time how a mutation in PAX5 leads to both autism and immune problems. For the individual patient, unfortunately, this does not immediately provide a different or new treatment. ‘That’s still years away. We are therefore extra grateful to him and his mother for being willing to cooperate with our research’, says Badura.