A patient diagnosed with cancer has increasingly better prospects because the medicines are becoming more effective. However, one risk remains. Even after the tumour has shrunk, it can start growing again after a while and spread to other organs. This aggressive spread through the body is usually caused by a small group of cells. ‘These cancer stem cells behave differently from other cells and therefore have a significant impact on cancer recurrence’, says Miao-Ping Chien of Erasmus MC, who works closely with Daan Brinks of TU Delft.

Their collaboration is a cross-pollination between two multidisciplinary labs located just fifteen kilometres apart. Brinks: “It’s easy to just jump on the bike or in the car to get to the other lab to do a few more tests at the end of the day.” What is special about their story is that they are not just colleagues but also partners. The couple came to the Netherlands together to join forces in cancer research.

Detecting a few cells that behave differently in a tumour has been a major challenge in the field of cancer research for many years. Chien: ‘We’ve known that they’re there for a long time, but the Holy Grail is to be able to sequence precisely those cells, to find out their DNA and RNA content. Merely examining the outside of the cell is not enough for these special cells. Although certain characteristic substances can be found there, the so-called biomarkers, these are quite changeable in such an aggressive cell.’ 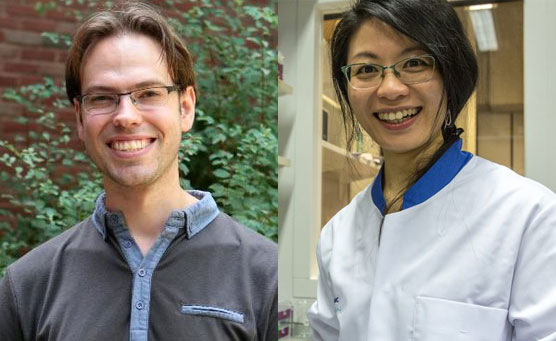 To know how those cells really work, Chien and Brinks need to decipher the genetic sequence. This makes it easier to determine how these cells work and also how they can be destroyed. Determining the genetic profile of cells has been possible for some time now, but determining the profile of individual cells has only been possible since a few years.

Chien and Brinks had to combine a whole range of techniques to be sure they had got the right cells. By working with two labs to piece together and fine-tune a complicated process, it is now possible to detect aggressive cancer cells, light them up, separate them from the other cells and then determine the RNA sequence. ‘The first question was: how do these aggressive cells behave? For example, we know that they move around more than other cells. And that they don’t split up into two cells, as in normal cell division, but into three or four cells’, explains Chien. So she had to look for such cells in a biopsy specimen, that is, a piece of cancer tissue.

The two researchers needed a microscope that could image a very large number of cells simultaneously as well as software to analyse the images. Together with the people working in their labs, they developed a microscope that continuously studies the images and ‘sees’ which cells are exhibiting abnormal behaviour. This behaviour of aggressive cancer cells unfolds within a time scale of minutes to hours, but analysing this behaviour needs to be done much faster. ‘After all, you don’t want the detected cells to have already moved again’, Brinks explains.

The microscope directs a light beam onto the detected aggressive cancer cells. The cells light up because the tissue has been treated with a special substance in advance. Next, the lit-up cells are selected and these are now ready for RNA sequencing and analysis. They only need a few to a few hundred cells. In Nature Biomedical Engineering, Brinks and Chien and colleagues describe their technique.

‘We can now determine the genetic profile of the aggressive cancer cells. This was not so easy to do at first, because you have to deal with all the challenges of imaging, selecting and determining the RNA sequence in one go. Everything in the process has to work properly’, says Chien. ‘And if you know what’s going on in those cells, you can develop medicines based on that. We’ve succeeded in discovering a mechanism within a few months, whereas others needed quite a few years with the existing techniques. We just happened to come out with it at about the same time. Maybe, with our method, it can eventually be done within a few weeks.’

The two are now setting up a company called UFO Biosciences so that researchers from all over the world can send in cell samples or pieces of cancer tissue for analysis. According to them, there is already a great deal of interest from other universities and research institutes.

It is no coincidence that Chien and Brinks actively looked for opportunities to cooperate when they set up their labs in Rotterdam and Delft. They got to know each other when they were both working at Harvard University in the US. Chien talks about how they were trained to work in a multidisciplinary manner: ‘I got such a broad background at Harvard, because I delved into cancer biology and biochemistry, as well as the technical side. Since then, my greatest interest lies in developing new methods in cancer biology.’ Brinks adds neuroscience and physics to the disciplines he was involved in at Harvard.

They particularly appreciated the fact that everyone who worked there had to have an understanding of all the disciplines. Brinks: ‘It wasn’t different fields of study side by side. In my opinion, that slows down the collaboration. You have to explain a lot of things before you can proceed. That’s not the case with us. While we each have our own areas of expertise, we also have a broad background. As a result, we speak each other’s language and can quickly build on each other’s ideas. With Miao-Ping, I can sometimes work out a new idea within the course of an evening.’

Chien and Brinks’ project is an example of the growing collaboration between research groups at TU Delft and Erasmus MC. For Brinks and Chien, this is a natural way of doing research and, according to Brinks, one that fortunately fits in with an already existing mindset at Delft and Rotterdam. Meanwhile, the two university cities are also forging a stronger bond under the heading of ‘Convergence for Health and Technology’.

For example, they are busy setting up Convergence Squares, which are meeting places to exchange ideas. Moreover, there will be more joint projects and researchers working for two of the three organisations, that is, for TU Delft and for Erasmus University or Erasmus MC. Brinks: ‘The institutes are creating an infrastructure for this now. We were fortunate with our situation and background, but this collaborative way of working should now also become easier and more standard for everyone.’

Nico Bruining and his team are the go-to people in the Erasmus MC for anything that has to do with computers and cardiology. Artificial intelligence has given their discipline a boost. ‘We build the technology of tomorrow, which we would have liked to have yesterday.’

Artificial Intelligence (AI) as a partner in healthcare. Researchers, tech businesses and the government are joining forces to make this happen. Together they are setting up 17 laboratories, two of which will be at Erasmus MC. ‘The impact of AI on healthcare could be enormous.’

In a joint research project with Delft University of Technology and Leiden University Medical Center, internist-oncologist Stefan Sleijfer is looking for a drug that can prevent cancer from spreading. Remarkable: the researchers are searching in a library of substances that are already used in daily practice.