A bit of stress is good for a person. If you have to sit an exam for example, stress gives you a better memory beforehand. The body produces extra adrenaline and the stress hormone cortisol. This elevates the heart rate and blood pressure. The body produces extra sugar and that can provide more energy short term. But stress is not only caused by psychological factors. Dr. Liesbeth van Rossum: “You see exactly the same biological stress reaction in pain or a severe flu. In these cases extra cortisol is also produced and the blood pressure goes up. That is a healthy reaction. Stress only becomes a problem if it lasts too long. For instance because of chronic pain or continuous work pressures.” 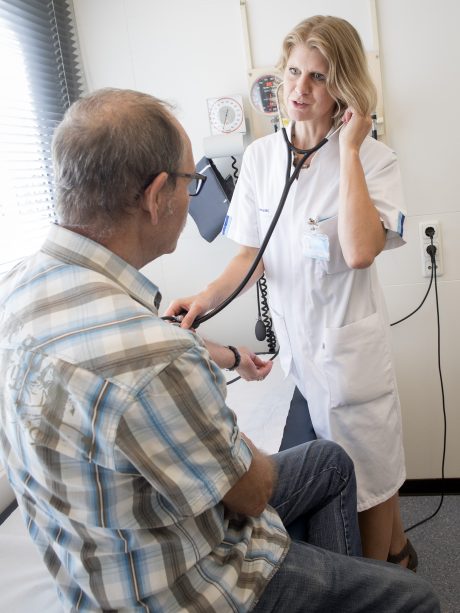 “You can measure stress by determining the cortisol value in blood, saliva or urine,” Van Rossum continues. “If there is more stress, the cortisol value goes up. The cortisol value fluctuates strongly during the course of the day. It is lowest at night, it peaks just before waking and it gradually declines as the day progresses, with the occasional spike. Giving blood is a stressful moment for many and this influences the measurements.” The existing methods of measurement only show the values for a particular moment. The great thing about the new hair measurement is that it produces an average score. Van Rossum: “The hair on your head grows by about a centimeter a month. So we take a centimeter of hair and see how high the average cortisol value was in the month that piece of hair was growing.”

We would die without cortisol. It ensures that many processes in the body take place properly. Van Rossum: “But if you have too much of it, or if you’re very sensitive to it, then the cholesterol and the blood pressure go up, fat accumulates especially in the abdominal area and the blood sugar value increases. These are risk factors for – among others – diabetes, cardiovascular disease and obesity. That is why chronic stress, be it  sychological or physical, is so risky.”

The new measuring method developed by Van Rossum and her team has also made new research possible. “A new world opens up. The findings and new insights are numerous” she relates. Van Rossum was able to show that people who work in shifts have a higher average stress hormone level. “Their sleeping pattern is disturbed, which disturbs the cortisol levels. On average they are more likely to suffer from obesity. It appears that this cannot just be explained by an increased tendency to eat junk food at night. It could just as easily be caused by an excess of cortisol.” In the same way she was able to show that toddlers who go to school for the first time suffer from a much higher level of stress in that first month than previously. By now Van Rossum is receiving numerous requests from scientists abroad who want to use the new measuring method.

As resident endocrinologist Van Rossum focusses largely on obesity. She is now using the new stress research to determine how obesity works. A striking result of the study is that from a BMI of 30 up – which is classified as obesity – the average cortisol level increases dramatically. Both in adults and in children. She says: “Up to a BMI of 30 the cortisol level barely rises, but above 30 it suddenly shoots up. We know a highly elevated cortisol level leads to a higher weight, but it is unclear why it suddenly goes up so sharply in people with obesity.” A logical explanation could be that cortisol does not only produce extra weight, but that the increased weight also influences the extra production or decreased breakdown of cortisol. “It does appear to be a vicious circle,” Van Rossum says. “That is what we are trying to determine.”