The variant of coronavirus identified in England, popularly called the British variant, binds seven times more strongly to the so-called ACE2 receptor on human cells than the original virus from Wuhan. The “South African variant” binds three times stronger. This is the conclusion of researchers from the Department of Molecular Genetics led by biochemist Dr. Joyce Lebbink, in the scientific Journal of Molecular Biology .

Only a few atoms

A seven-fold increase in binding is a big difference, Lebbink believes. ‘You have to realize that we are talking about one amino acid change between the original variant and the variant identified in England. This is only a few atoms causing such a big difference.’ 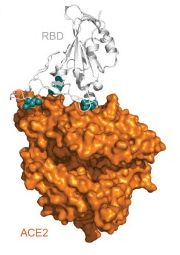 Mutations in the spike protein of the virus (blue spheres in grey strands) affect the binding to the ACE2 receptor on the body cells (orange).

Lebbink believes the stronger binding may contribute to the faster spread of the coronavirus mutants. ‘Attachment of the virus to our cells is not the only factor that determines infectivity, but from a biochemical point of view this correlation does not surprise us. These virus variants bind longer to the receptor than the original virus and therefore have a greater chance of entering the cell.’

The research involved a feat of genetic and technological ingenuity. Using synthetic DNA, the researchers recreated pieces of the spike protein of the coronavirus variants and the human ACE2 receptor to which the virus binds. By injecting a solution containing the pieces of spike protein over a chip with a layer of ACE2 receptors, the scientists were able to determine how quickly the spike protein binds to the receptor and how rapidly it releases. Combined, this determines affinity, or the strength of binding. By repeating the experiment with the different virus variants, an accurate comparison of binding affinities could be made.

Lebbink and her colleagues Charlie Laffeber, Kelly de Koning and Prof Roland Kanaar normally work on DNA repair. A completely different field from coronaviruses. ‘It’s an excursion, initiated during the first lockdown. Like many other scientists we felt the need to contribute,’ says Lebbink. The technique they use to measure, for example, how mutated proteins bind to DNA proved equally applicable to the interaction between coronavirus and ACE2 receptor. Meanwhile, normal work on DNA repair has largely resumed, but there are plans to also determine the binding affinity of the variant causing problems in India.

About 25,000 children and 50,000 adults with a congenital heart defect are living in the Netherlands. A team of experts at the Erasmus MC provides them with specialized care and studies how their care can be improved.

As of June 1, 2021, Prof.dr. Ruud Selles has been appointed professor with a shared appointment in the departments of Rehabilitation Medicine and Plastic Surgery. He will investigate the best treatments for hand and wrist disorders using a huge database with patient data and treatment outcomes. Ruud: ‘It’s really strange that this approach is new, […]

On September 29th the Rogier Hintzen Award will be presented for the second time. Talented young researchers working on MS research can nominate themselves or others in the field.

On Wednesday 7 July, the presidents of TU Delft, Erasmus MC and Erasmus University Rotterdam signed a framework agreement for far-reaching strategic cooperation within the Convergence Alliance. In research and education the institutions are committed to combining their strengths, knowledge and methods to address issues related to climate change, sustainability, pressure on the healthcare system, […]

A proportion of patients with difficult-to-treat non-metastatic bladder cancer benefit from immunotherapy with the drug pembrolizumab. This has been shown by international research, which Erasmus MC Cancer Institute co-led. Annually, researchers estimate this new therapy could save about 50 patients in the Netherlands from having their bladder removed.